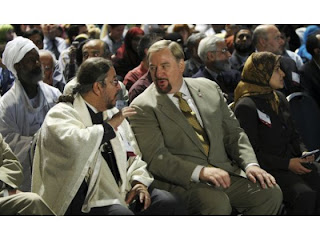 So…Pastor Rick Warren (Purpose Driven Life) is the leader of an initiative to bridge the gap between Christians and Muslims. Warren has been working on this project called King’s Way for years, according to the OrangeCounty Register newspaper. An effort like this may not seem harmful at first, but the results can be catastrophic. Whenever Christians “join forces” with those from other faiths we have to be careful not to not compromise our beliefs. Otherwise our ministry is ruined.

King’s Way focuses on the similarities of Christianity and Islam. An EX Ministries post says that they are focusing on the similarities between the Bible and the Koran along with the fact that both faiths promote loving God and other people. There may seem to be many similarities, however, the few differences are what separate our faith from all others. Jesus Christ is the only way to heaven! There is nothing wrong with being kind to other people. We know Jesus called us to love everyone. But when Christians become allies with another faith and even claim that we serve the same God as Muslims…that is a BIG problem.

Our primary mission is to spread the gospel of Jesus, not make friends. This effort looks good to the press, seems nice, and backs the ‘tolerance’ movement going on today. It will not, though, aid true Christians in helping those from other faiths realize that they are eternally lost without Christ.
God's Word through HermanC at 1:00 PM