And being found in appearance as a man, He humbled Himself and became obedient to the point of death, even the death of the cross.
Philippians 2:8 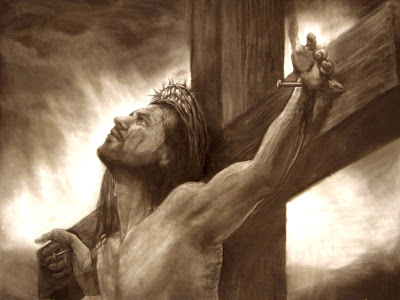 Not only did Jesus allow Himself to be murdered (wow, as if that isn’t enough to wrap our minds around), He allowed Himself to be killed on the Cross! This was Jesus’ seventh and final step all the way down from Heaven. In His time on earth the Cross was the most despicable and vile form of execution. If you’re reading this at work take some time to mediate on this alone later.

Stressed to the point of sweating blood. Slapped and spit on the night before. The whip used had several leather straps with metal balls at the end. One physician says by the end of the flogging His back and legs were probably nothing more than an unrecognizable mass of torn bleeding tissue. Our Lord tried to carry His own cross, but the intense weight was too much as His body weakened from losing copious amounts of blood. An iron nail was driven firmly through each wrist and one through both feet. For hours He hung on that cross. For hours He hung there! Could you imagine the pain as those nails tore through His flesh? Pain was shooting through Christ’s body. Jesus’ blood came streaming down! His muscles gave out. Jesus suffocated. Our Lord cried, “It is finished” and surely He died on that cross.

When you read the words ‘He humbled Himself and became obedient to the point of death, even the death of the cross’ think about what that really means! Jesus did that just for you!

One day when I was lost
He died upon that cross,
He hung His head and died for me.
God's Word through Unknown at 9:06 AM