“Praise ye the Lord. Praise God in his sanctuary: praise him in the firmament of his power. Praise him for his mighty acts: praise him according to his excellent greatness." ~ Psalm 150:1-2

God is to be recognized simply for who He is. Too often we take God for granted. He is our friend, but He is also the Lord. And although we can come to him openly, we should also approach Him reverently. The average prayer is a wish list to Jesus. And most times someone praises God it is only because He has done something for them. But aside from all of that God is still God. Before asking Him for this and that we need to remember to recognize His sovereignty. 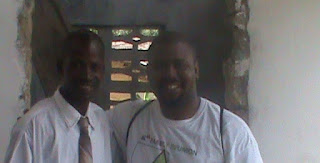 Pastor Joe V. Kollie of the First Assembly of God Church in Salala

I attended the First Assembly of God Church in Salala, Liberia in 2012. After walking through the villages and seeing the grave poverty, I didn’t know what to expect in the service. What could they possibly praise God for? However the service was amazing! It was simply filled with praise and adoration for the Lord. It put any church in the U.S. I’ve ever been attended to shame. The Christians there aren’t concerned about what they have or don’t have because they are too wrapped up in who God is.
God's Word through Unknown at 3:30 AM